By Chimsima Zuhri on June 12, 2011 in African American History, June 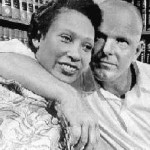 June 12, 1967 The United States Supreme Court in the case of Loving v. Virginia ruled that Virginia’s anti-miscegenation statue, the Racial Integrity Act of 1924, was unconstitutional.

This ruling ended all race-based legal restrictions on marriage in the United States. The Racial Integrity Act was a state law that banned marriage between any white person and any non-white person. The story of the Lovings was turned into a film, “Mr. & Mrs. Loving,” in 1996.