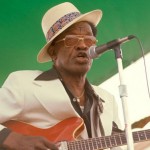 Hopkins developed a deep appreciation of the blues at the age of eight, but did not make his first recording until 1946.

By 1960, Hopkins had cemented his reputation as one of the most compelling blues performers and he made his debut at Carnegie Hall in October of that year. Throughout the 1960s and 1970s, Hopkins released one or more albums a year and toured, playing at major folk festivals in the United States and internationally. His recordings include “Last Night Blues” (1960), “Lightnin’ Strikes” (1965), “My Life in the Blues” (1967), and “Freeform Patterns” (1968).

It is estimated that Hopkins recorded between 800 and 1000 songs during his career and recorded more albums than any other bluesman. His informal lifestyle was captured in the 1967 documentary “The Blues According to Lightnin’ Hopkins.” Hopkins died January 30, 1982 and there is a statute of him in Crockett, Texas. A state historical marker was dedicated to him in 2010 in Houston, Texas. Biographies of Hopkins include “Lightnin’ Hopkins: Blues Guitar Legend” (1995), “Deep Down Hard Blues: Tribute to Lightnin’” (1995), and “Lightnin’ Hopkins: His Life and Blues” (2010).