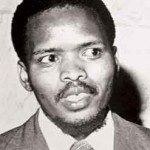 In 1968, Biko helped found the South African Students’ Organization, which evolved into the Black Consciousness Movement, and was elected its first president. In March, 1973, he was banned by the government which meant that he could not give speeches in public and was restricted to certain areas of the country.

Despite these restrictions, he and the BCM played a significant role in organizing the protests which culminated in the Soweto Uprising in June, 1976. On August 21, 1977, Biko was arrested under the Terrorism Act of 1967 and suffered a major head injury while being interrogated by the police. As a result, he died on September 12, 1977 at the Pretoria prison. Several universities in the United Kingdom and the main student union buildings at the University of Cape Town are named in his honor and, each year, a commemorative Steve Biko lecture is delivered on the anniversary of his death. Also, the Durbin University of Technology has named its largest campus after him and a bronze bust of him sits in Freedom Square on the campus.

The 1987 film “Cry Freedom” was a biographical drama based on the life of Biko.A number of books have been published about Biko, including “Steve Biko: Black Consciousness in South Africa” (1978) and “Biko” (1978).