By Chimsima Zuhri on May 29, 2011 in African American History, May, Medicine 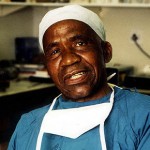 Naki was born June 26, 1926 in the Eastern Cape of South Africa and was educated up to the age of 14. While working as a gardener at the University of Cape Town, Naki was selected to work in the clinical laboratory to look after animals and perform other basic duties. Over time, Naki became one of four technicians in the research laboratory at the medical school.

Despite being listed on the hospital records as a gardener, he was paid the salary of a senior lab technician, the highest pay for someone without a diploma. In the late 1950s, Naki began working with Chirstiaan Barnard while he was developing open heart surgical techniques. In an interview, Barnard called Naki “one of the great researchers of all time in the field of heart transplants’ and “Naki was a better craftsman than me, especially when it came to stitching.”

Naki went on to train students and professors on transplant techniques. Naki retired in 1991 on a gardener’s pension. In 2002, he received the National Order of Mapungubwe in Bronze and in 2003 he received an honorary degree in medicine from the University of Cape Town.