By Chimsima Zuhri on May 3, 2011 in African American History, May 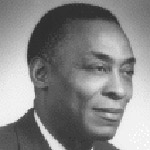 May 3, 1999 Ed Davis, the first African American to win a franchise to sell new cars, died.

Davis was born February 27, 1911 in Shreveport, Louisiana and as a teenager moved to Detroit to attend integrated public schools. Davis’ first job was at a car repair garage where the owner instructed him to look busy doing janitorial work when customers were in the garage and not appear to be working on any cars.

In 1936, he began selling cars for a Chrysler-Plymouth dealership that was interested in attracting African American customers. In 1939, Davis opened Davis Motor Sales, a used car dealership. Davis was so successful that in 1940 he was offered a Studebaker new car dealership which he operated until 1956 when Studebaker went out of business.

In 1963, Davis opened Davis Chrysler-Plymouth, the first African American to be awarded a new car franchise from one of the “Big Three” automakers. Davis operated the dealership until 1971 and in 1966 was named Michigan’s Small Businessman of the Year. After closing the dealership, Davis spent the next 20 years as a consultant to minority auto dealers and other African American business owners.

Davis published his autobiography, “One Man’s Way,” in 1979 and became the first African American to be inducted into the Automotive Hall of Fame in 1999.