By Chimsima Zuhri on May 29, 2011 in African American History, May, Politics 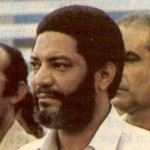 May 29, 1944 Maurice Rupert Bishop, former Grenadian Prime Minister, was born on the island of Aruba.

Bishop earned his Bachelor of Arts degree at Presentation College and was educated at the London School of Economics. After returning to Grenada in 1973, he was elected head of the Marxist New Jewel Movement political party. Bishop was elected to Parliament and for several years held the position of leader of the opposition in the Grenadian House of Representatives.