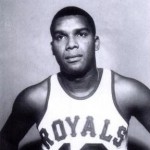 Stokes was born June 17, 1933 in Rankin, Pennsylvania. He played basketball for Saint Francis University and graduated in 1955. He was named the Most Valuable Player of the 1955 National Invitational Basketball Tournament. In the 1955 NBA Draft, he was selected by the Cincinnati Royals and was named NBA Rookie of the Year that season.

Stokes professional career was cut short when he fell and hit his head in the last game of the 1958 season. He later suffered a seizure, fell into a coma, and was left permanently paralyzed. Stokes was posthumously inducted into the Naismith Memorial Basketball Hall of Fame in 2004. In 1973, his story was told in the film “Maurie.” The Stokes Athletic Center on the campus of Saint Francis University is named in his honor.