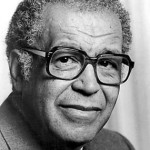 Higginbotham was born February 25, 1928 in Ewing, New Jersey. He earned his Bachelor of Arts degree in 1949 from Antioch College and his Bachelor of Laws degree from Yale University in 1952. From 1954 to 1962, he worked in private practice as a member of the first African American law firm in Philadelphia, Pennsylvania. In 1962, President John F. Kennedy appointed Higginbotham a commissioner on the Federal Trade Commission, the first African American commissioner on any regulatory commission.

In 1964, he was appointed a District Court judge by President Lyndon B. Johnson and served 13 years before being elevated to the United States Court of Appeals by President Jimmy Carter. He was Chief Judge of the Court of Appeals from 1990 to 1991 before retiring from the bench in 1993. Higginbotham founded the South Africa Free Election Fund and raised several million dollars to support fair elections in South Africa and served as one of the international mediators of the 1994 election. After the election, he helped the government draft a new constitution.

President William Clinton presented Higginbotham the Presidential Medal of Freedom, the nation’s highest civilian honor, in 1995 and in 1996 the NAACP awarded him the Spingarn Medal. The Lawyers’ Committee for Civil Rights Under Law annually presents the A. Leon Higginbotham Corporate Leadership Award. Higginbotham authored “In the Matter of Color: Race and the American Legal Process 1: The Colonial Period” in 1978 and “Shades of Freedom: Racial Politics and Presumptions of the American Legal Process” in 1996.