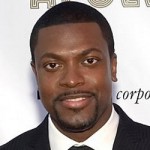 After graduating from high school, Tucker moved to Los Angeles to pursue a career in comedy and movies. He made his film debut in “House Party 3” (1994) and his first major role was in the 1995 film “Friday.”