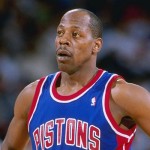 Johnson played college basketball at Baylor University and was a two-time All-American. He holds the Baylor record for most points scored in a game. Johnson was selected by the Seattle SuperSonics in the 1979 NBA Draft and traded to the Detroit Pistons in 1981. He earned the nickname “The Microwave” for his ability to score many points in a short period of time.

Johnson was a key sixth man for the Pistons during their two championship seasons of 1989 and 1990. Johnson retired in 1992 and the Pistons retired his number 15 jersey in 1994. He is currently chairman of the Piston Group, an automotive supply company.