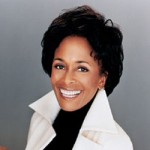 In 1986, the American Humanist Association named her Humanist of the Year and in 1993 she was inducted into the National Women’s Hall of Fame. She currently serves as the president of the Center for the Advancement of Women.