By Chimsima Zuhri on July 8, 2011 in African American History, July 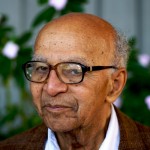 After earning his doctorate, he applied for a position at the University of California but was turned down because of his race. Therefore, from 1942 to 1954 he taught at Southern University, Clark College, and Howard University where he became the head of the mathematics department at the age of 28. In 1955, Blackwell was hired by the University of California where he became the first black tenured faculty member. In 1979, Blackwell won the von Neumann Theory Prize, awarded annually “to a scholar who has made fundamental, sustained contributions to theory in operations research and the management sciences.”