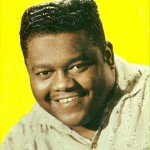 Domino first attracted national attention with the 1949 release of “Fat Man” which is widely regarded to be the first rock and roll record to sell more than a million copies.

Domino was inducted into the Rock and Roll Hall of Fame in 1986, received the Grammy Lifetime Achievement Award in 1987, received the Pioneer Award from the Rhythm and Blues Foundation in 1995, and was presented with the National Medal for the Arts, the highest honor bestowed on an individual artist by the United States, by President William Clinton in 1998. After Hurricane Katrina, it was incorrectly reported that Domino had died when in fact he was rescued by a Coast Guard helicopter.

In 2006, Domino released an album, “Alive and Kickin’,” to support New Orleans’ musicians. Domino has sold more than 110 million records in his career. His biography, “Blue Monday-Fats Domino and the Last Dawn of Rock ‘n’ Roll,” was published in 2006.