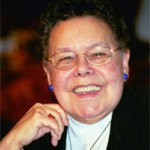 Kelly earned her Bachelor of Arts degree from Virginia Union University in 1960 and her Master of Divinity degree from the Union Theological Seminary in 1976.

In 1983, she became assistant general secretary for evangelism for the United Methodist General Board of Discipleship. The following year she was elected bishop and served until her retirement in 1988. Following her retirement, Kelly served as visiting professor of Evangelism and Witness at Pacific School of Religion.

Her many honors and awards include 10 honorary degrees and the Martin Luther King, Jr. Drum Major for Justice and Grass Roots Leadership awards from the Southern Christian Leadership Conference. In 2000, Kelly was inducted into the National Women’s Hall of Fame and in 2002 she received the Thomas Merton Award, given annually to “national and international individuals struggling for justice.”