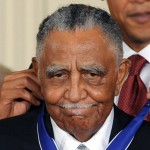 October 6, 1921 Joseph Echols Lowery, minister and “the dean of the Civil Rights Movement,” was born in Huntsville, Alabama.

In 1955, he helped lead the Montgomery bus boycott and in 1957 co-founded the Southern Christian Leadership Conference. Lowery served as president of SCLC from 1977 to 1997. Lowery also co-founded and was president of the Black Leadership Forum, a consortium of advocacy groups that protested apartheid in South Africa.

He is now retired from the ministry, but remains active in the civil rights movement. Lowery has received a number of awards, including the NAACP Lifetime Achievement Award in 1997 and the National Urban League’s Whitney M. Young, Jr. Lifetime Achievement Award in 2004. Joseph E. Lowery Boulevard in Atlanta is named in his honor as is the Joseph E. Lowery Institute for Justice & Human Rights at Clark Atlanta University.

In 2009, Lowery was awarded the Presidential Medal of Freedom, the nation’s highest civilian honor, by President Barack Obama. In 2011, he published “Singing the Lord’s Song in a Strange Land.”