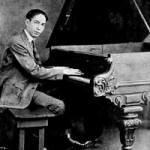 The date of his birth is not confirmed because no birth certificate has ever been found, but it is generally believed to be this date. At the age of 14, Morton began playing piano in a brothel and around 1904 he was wandering the south, working with minstrel shows and composing. By 1914, Morton started writing down his compositions and his “Jelly Roll Blues” (1915) was the first jazz composition ever published.

Other compositions by Morton include “Wolverine Blues” and “Black Bottom Stomp.” In 1926, Morton got a contract to record for Victor Records and these recordings by Jelly Roll Morton & His Red Hot Peppers are regarded as classics of 1920s jazz. In 1938, Morton recorded music and interviews for the Library of Congress which was released in 2005 as “The Complete Library of Congress Recordings.” The collection won Grammy Awards for Best Historical Album and Best Album Notes. Morton died on July 10, 1941. In 1998, he was posthumously inducted into the Rock and Roll Hall of Fame and in 2005 he was posthumously honored with the Grammy Lifetime Achievement Award.

Two Broadway shows have featured his music, “Jelly Roll” and “Jelly’s Last Jam.” Several biographies have been written about Morton, including “Mister Jelly Roll” (1950) and “Jelly’s Blues: The Life, Music, and Redemption of Jelly Roll Morton” (2003).