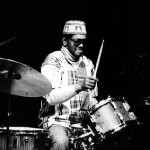 Blackwell was born October 10, 1929 in New Orleans, Louisiana. He began his career in the 1950s and first came to national attention as the drummer with Ornette Coleman’s quartet around 1960. Blackwell was one of the great innovators of the free jazz movement of the 1960s, fusing New Orleans and African rhythms with bebop.

In the 1970s and 1980s, he toured and recorded extensively in the quartet Old and New Dreams. Blackwell rarely performed as band leader, but in the early 1990s he formed the Ed Blackwell Project which recorded “What It Be Like?” and “What It Is!” In the late 1970s, Blackwell was appointed artist-in residence at Wesleyan University, a position he held until his death. He was posthumously inducted into the Down Beat Jazz Hall of Fame in 1993.