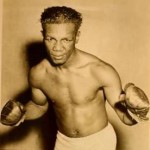 He fought for many years before winning the World Featherweight Championship in September, 1941. He successfully defended the title once before losing it in November, 1942. Wright retired in 1948 with a record of 160 wins, 43 losses and 18 draws. After retiring, Wright served as a chauffeur and bodyguard for Mae West. He died August 12, 1957 and was posthumously inducted into the International Boxing Hall of Fame in 1997.