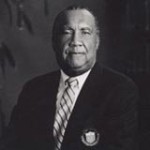 Wright was born August 11, 1921 in Englewood, New Jersey. He earned his bachelor’s degree from Springfield College and his master’s degree from Columbia University. In 1950, Wright began his coaching career at Texas Southern University. The TSU “Flying Tigers” became nationally known for their success at major track meets.

From 1967 to 1969, Wright served as head coach at Western Illinois University and from 1969 to 1979 he held the same position at Sacramento State University. He also served as athletic director at Sacramento State and Fairleigh Dickinson University. At the request of the United States State Department, Wright coached the Singapore track team at the 1962 Asian Games and Malaysia at the 1964 Tokyo Olympic Games. In 1966, he became the first black head coach of a U.S. national track team.

In 1968 and 1972, he was assistant coach in charge of sprinters for the U.S. Olympic team. Wright also served as chairman of The Athletic Congress Budget and Finance Committee from 1980 to 1989 and treasurer from 1989 to 1992. He was inducted into the National Track and Field Hall of Fame in 1993. His biography, “Stan Wright, Track Coach: Forty Years in the ‘Good Old Boy Network’ — The Story of an African-American Pioneer,” was published in 2005.