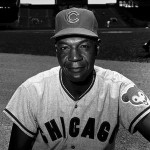 O’Neil was born November 13, 1911 in Carrabelle, Florida. In 1937, he signed a contract with the Memphis Red Sox in the Negro American League. The next year, his contract was sold to the Kansas City Monarchs where he played first base for the next 12 seasons. In 1948, O’Neil was named manager of the Monarchs and served in that capacity for eight seasons. After resigning from the Monarchs in 1955, he became a scout for the Chicago Cubs and is credited with signing hall of famer Lou Brock to his first contract.

In 1962, he was named the first African American coach in the major leagues by the Cubs. In 1988, O’Neil became a scout for the Kansas City Royals and in 1998 was named Midwest Scout of the Year. O’Neil was a member of the Baseball Hall of Fame Veterans Committee from 1981 to 2000 and played an important role in the induction of six Negro League players. In 1990, O’Neil led the effort to establish the Negro League Baseball Museum in Kansas City, Missouri and served as honorary board chairman until his death on October 6, 2006. In 2007, the Baseball Hall of Fame inaugurated the Buck O’Neil Lifetime Achievement Award and made O’Neil the first recipient. O’Neil’s autobiography, “I Was Right on Time: My Journey from the Negro Leagues to the Majors,” was published in 1997.