By Chimsima Zuhri on December 7, 2011 in African American History, December 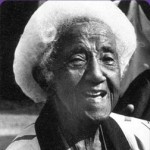 Joyner was born October 24, 1896 in Monterey, Virginia. In 1916, she became the first African American to graduate from A. B. Molar Beauty School in Chicago. After graduating, she went to work for Madam C. J. Walker, overseeing 200 of her schools as the national advisor.

On November 17, 1928, Joyner received patent number 1,693,515 for her invention of the permanent wave machine. The machine was used to curl or straighten hair by wrapping rods above the person’s head and then cooking them to set the hair. This method allowed hairstyles to last several days. The machine was popular with African American and white women, however because Joyner was working for Walker the machine was credited to Walker’s company and she received almost no money for the invention.

In 1945, Joyner co-founded the United Beauty School Owners and Teachers Association and in 1973, at the age of 77, she earned her Bachelor of Science degree in psychology from Bethune-Cookman College.