By Chimsima Zuhri on May 15, 2011 in African American History, Artist, May 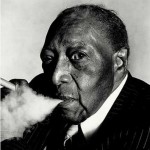 Van Der Zee was born June 29, 1886 in Lenox, Massachusetts. As a child, he learned piano, violin, and art. He received his first camera at the age of 14 from a magazine promotion. After moving to New York City, Van Der Zee worked as a darkroom technician at a department store. In 1917, he opened his own studio, Guarantee Photography, and was immediately successful. In 1932, he outgrew his first studio and opened the larger GGG Studio.

During the Great Depression, when demand for professional photographs was lessened, Van Der Zee supported himself by shooting passport photographs and other photographic jobs. Van Der Zee photographed many famous individuals, including Marcus Garvey, Bill “Bojangles” Robinson, and Countee Cullen. His work was featured in the 1969 “Harlem on my Mind” exhibition at the Metropolitan Museum of Art. His complete collection totaled 75,000 photographs.