By Chimsima Zuhri on February 12, 2011 in African American History, February 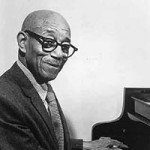 Blake was born February 7, 1887 in Baltimore, Maryland. He began taking music lessons at the age of 7 and at 15 was playing piano in a bordello. In 1912, he began playing in vaudeville and shortly after World War I joined forces with Noble Sissle as the Dixie Duo.

After vaudeville, the pair created “Shuffle Along” which premiered on Broadway in 1921 and became the first hit Broadway musical written by and about African Americans. It also introduced the hit songs “I’m Just Wild About Harry” and “Love Will Find a Way.” By 1975, Blake had been awarded honorary doctorates by a number of institutions, including Rutgers, the New England Conservatory, Pratt Institute, and Dartmouth. The 1978 Broadway musical “Eubie” featured the works of Blake.

In 1981, Blake received the Presidential Medal of Honor from President Ronald Reagan and in 1983 he was inducted into the Big Band and Jazz Hall of Fame. In 1995, the United States Postal Service issued a commemorative postage stamp in his honor.

In 1998, the James Hubert Blake High School opened in Silver Springs, Maryland. In 2006, the album “The Eighty – Six Years of Eubie Blake” (1969) was included by the National Recording Preservation Board in the Library of Congress’ National Recording Registry as a recording of “cultural, historical, or aesthetical significance”. Blake’s biography, “Eubie Blake,” was published in 1979.