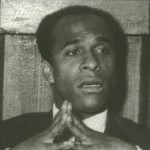 Fanon was born July 20, 1925 on the Caribbean island of Martinique. He served in the French army during World War II. Fanon’s service in the French army and his experiences in Martinique fueled his first book, “Black Skin, White Masks,” (1952) which analyzed the effects of colonial subjugation on humanity.

In 1961, he wrote “The Wretched of the Earth,” which discussed the effects on Algerians of torture by the French forces during the Algerian revolution. Many of his shorter writings were posthumously published in the book “Toward the African Revolution.” Several biographies of Fanon have been published, including “Fanon” (1971) and “Frantz Fanon: A Life” (2001).