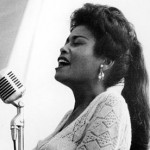 In 1960, Lincoln sang on the landmark jazz civil rights recording “We Insist! – Freedom Now Suite” by Max Roach. Lincoln appeared in several films, including “The Girl Can’t Help It” (1956), “Nothing But a Man” (1964), “For Love of Ivy” (1968), for which she received a Golden Globe nomination, and “Mo’ Better Blues” (1990). In 2003, Lincoln was honored with the National Endowment for the Arts Jazz Masters Award, the highest honor the nation bestows on a jazz artist.

The Public Broadcasting System aired a documentary of Lincoln’s life, “You Gotta Pay the Band: The Words, the Music, and the Life of Abbey Lincoln,” in 1992.

National Endowment for the Arts, songwriter