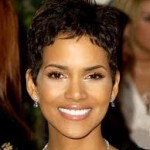 Prior to becoming an actress, Berry won Miss Teen All-American in 1985, Miss Ohio USA in 1986, and she was first runner-up in Miss USA 1986. That same year, she became the first African American entrant in the Miss World contest, finishing sixth. Halle Berry’s breakthrough feature film role was in “Jungle Fever” (1989).

Other films that she has appeared in include “Losing Isaiah” (1995), “Bulworth” (1998), and the “X-Men” trilogy. In 2001, she won the Academy Award for Best Actress for her performance in “Monster’s Ball,” the first and only African American to win that award. In accepting the award Berry said, “This moment is so much bigger than me. This is for every nameless, faceless woman of color who now has a chance tonight because this door has been opened.”

In addition, in 2000 she won an Emmy Award for Outstanding Lead Actress – Miniseries or Movie for her performance in “Introducing Dorothy Dandridge” and in 2005 she was nominated in that same category for her performance in “Their Eyes Were Watching God.” In 2010, Berry starred in “Frankie and Alice” and was nominated for the Golden Globe Award for Best Actress – Motion Picture Drama.