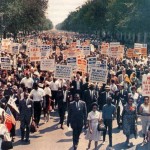 August 28, 1963 More than 250,000 people participated in the March on Washington for Jobs and Freedom in Washington, D.C. by marching from the Washington Monument to the Lincoln Memorial.

At the Lincoln Memorial King gave his famous “I Have a Dream” speech, first delivered in Detroit on June 23, 1963. The march is widely credited with helping to pass the Civil Rights Act of 1964 and the National Voting Rights Act of 1965.