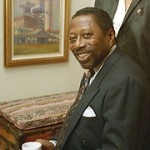 Robert Clyve Maynard was born June 17, 1937 in Brooklyn, New York. He began his journalism career in 1961 in Pennsylvania. In 1965, he received a Nieman Fellowship to Harvard University and the following year he joined the editorial staff of the Washington Post. In 1979, Maynard became editor of The Oakland Tribune and in 1981 he purchased the paper, becoming the first African American to own a major metropolitan newspaper.

He is recognized for turning the struggling newspaper into a 1990 Pulitzer Prize-winning journal. Maynard used the outreach of the paper to better the community by pushing for improved schools, trauma care centers, and economic development.

In 1997, Maynard co-founded the Institute for Journalism Education, an organization dedicated to training journalists of color and providing accurate representation of minorities in the news media. The institute has trained more than 1,000 journalists and editors across the United States and was renamed in his honor after his death.