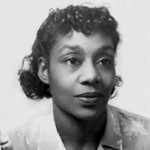 Dorothy West was born June 2, 1907 in Boston, Massachusetts. She wrote her first story at the age of seven and at the age of 14 won several local writing competitions. In 1926, West tied for second place with Zora Neale Hurston in a writing contest sponsored by the Urban League’s Opportunity Magazine with her short story “The Typewriter.”

After moving to Harlem, in 1934 West founded and published the Challenge Magazine and its successor New Challenge Magazine which were among the first to publish literature featuring realistic portrayals of African Americans. During the early 1940s, West wrote a number of short stories for the New York Daily News. In 1948, West’s first novel, “The Living is Easy,’ was published.

For the next 40 years, West worked as a journalist for small newspapers on Martha’s Vineyard. In 1995, her second novel, “The Wedding,” was published and in 1998 Oprah Winfrey turned it into a two-part television mini-series. Also in 1995, a collection of her short stories and reminiscences called “The Richer, The Poorer” was published.