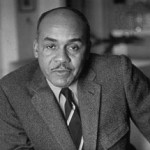 Ellison was born March 1, 1914 in Oklahoma City, Oklahoma. In 1933, Ellison entered Tuskegee Institute on a music scholarship but after his third year he moved to New York City where he met Richard Wright who encouraged him to pursue a career in writing. From 1937 to 1944, Ellison had over 20 book reviews, short stories, and articles published in magazines.

In 1952, he published the novel “Invisible Man” which won the 1953 National Book Award. In 1964, Ellison published “Shadow and Act,” a collection of essays, and began to teach at Rutgers and Yale Universities. In 1969, he received the Presidential Medal of Freedom and the following year he became a permanent member of the faculty at New York University. In 1975, Ellison was elected to the American Academy of Arts and Letters and Oklahoma City honored him with the Ralph Waldo Ellison Library.

In 1985, Ellison was awarded the National Medal of Arts. His manuscripts “Flying Home and Other Stories” and “Juneteenth” were published posthumously in 1996 and 1999.