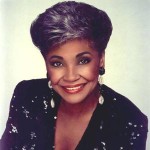 At the age of 15, Wilson won a talent contest sponsored by a local television station. The prize was an appearance on a show which she ended up hosting.