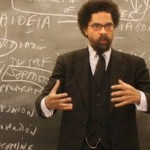 From 1988 to 1994, he was professor of religion and director of the Program in African American Studies at Princeton. In 1998, he was appointed the first Alphonse Fletcher University Professor at Harvard University. In 2001, West returned to Princeton where he currently teaches. West has authored more than 20 books, including “Black Theology and Marxist Thought” (1979), “Race Matters” (1993), “The Future of the Race” (1996), and “Brother West: Living & Loving Out Loud” (2009). He has also received more than 20 honorary degrees from colleges and universities around the country.