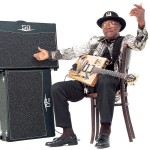 Between 1958 and 1963, he released eleven full-length albums. In 1987, Diddley was inducted into the Rock and Roll Hall of Fame, in 1998 he received a Lifetime Achievement Award from the Rhythm and Blues Foundation and a Grammy Lifetime Achievement Award, and in 1999 his song “Bo Diddley” was inducted into the Grammy Hall of Fame, as a recording of “lasting qualitative or historical significance.”

Diddley played at the presidential inaugurations of President George W. Bush in 1989 and President William Clinton in 1993.