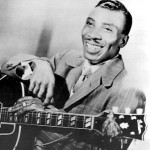 In 1971, Walker won a Grammy Award for Best Ethnic or Traditional Recording for “Good Feelin’” and in 1985 he was posthumously given a Grammy Lifetime Achievement Award. Walker was posthumously inducted into the Blues Hall of Fame in 1980 and into the Rock and Roll Hall of Fame in 1987. Chuck Berry and Jimi Hendrix acknowledged that they were greatly influenced by the guitar playing of Walker.