By Chimsima Zuhri on October 23, 2010 in African American History, October 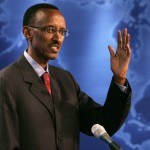 October 23, 1957 Paul Kagame, President of the Republic of Rwanda, was born in Ruhango, Rwanda.

Kagame began his military career in 1979 when he joined the National Resistance Army (NRA) and spent years fighting as a guerrilla against the government of Uganda. In 1985, Kagame co-founded the Rwandese Patriotic Front (RPF) political party. In 1986, he became the head of military intelligence for the NRA.

During 1990, Kagame received military training from the United States Army at Fort Leavenworth and that same year he became military commander of the RFP. Kagame became President of Rwanda in 2000 and in 2003 won the first national election since 1994. Under his leadership, Rwanda has been called Africa’s biggest success story.

As a result, Kagame has received many honors, including the 2003 Global Leadership Award in recognition of his “commitment and tireless work to address crises, foster understanding, unity, and peace to benefit all people” and the 2009 Clinton Global Citizen Award in recognition of his “leadership in public service that has improved the lives of the people of Rwanda.”