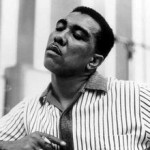 Palmer was born October 25, 1924 in New Orleans, Louisiana. He started his entertainment career at the age of five as a tap dancer on the black vaudeville circuit. He toured the country extensively with the Darktown Scandals Review. Palmer served in Europe for the United States Army during World War II.

After the war, he studied piano and percussion and started drumming with the Dave Bartholomew Band. He also recorded on most of the hits by Fats Domino and Little Richard. Palmer moved to Los Angeles, California in 1957 where he played drums on the soundtracks of many movies and television shows. He also played on recordings by Frank Sinatra, Rick Nelson, Ray Charles, Randy Newman, Bonnie Raitt, and Elvis Costello.

In 2000, Palmer became one of the first session players to be inducted into the Rock and Roll Hall of Fame. His biography, “Backbeat: the Earl Palmer Story,” was published in 1999.