By Chimsima Zuhri on February 20, 2012 in Acting, African American History 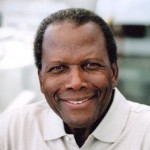 At 17, Poitier moved to New York City and joined the American Negro Theater. He made his film debut in “No Way Out” (1950) and his breakout role was in “Blackboard Jungle” (1955).

In 1997, Poitier was appointed ambassador of the Bahamas to Japan. In 2002, Poitier received an Honorary Award from the Academy of Motion Pictures Arts and Sciences “in recognition of his remarkable accomplishments as an artist and as a human being.” In 2009, he was awarded the Presidential Medal of Freedom, America’s highest civilian honor, by President Barack Obama. The documentary “Sidney Poitier: an Outsider in Hollywood” was released in 2008.