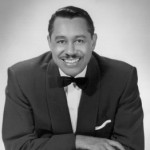 Calloway was born December 25, 1907 in Rochester, New York. After graduating from high school, Calloway joined his sister in a touring production of the black musical revue “Plantation Days.” In 1930, he assumed leadership of his orchestra and they became the co-host band at the Cotton Club in New York City and began touring nationally.

In 1931, Calloway recorded his most famous song, “Minnie the Moocher,” and as a result of the chorus became known as “The Hi De Ho Man.” In 1933, he appeared in the film “International House” and performed his classic song “Reefer Man,” a tune about a man who favors marijuana cigarettes. Other film appearances include “Stormy Weather” (1943), “Porgy and Bess” (1952), and “The Cincinnati Kid” (1965). In 1976, his autobiography, “Of Minnie the Moocher and Me,” was published. In the 1980s, the Cab Calloway Museum at Copin State College was established and the Cab Calloway School of the Arts in Wilmington, Delaware was dedicated in 1994.

In 1987, Calloway was inducted into the Big Band and Jazz Hall of Fame and in 1993 he was awarded the National Medal of Arts, the highest honor bestowed on an individual artist by the United States, by President William Clinton. In 1999, “Minnie the Moocher” was inducted into the Grammy Hall of Fame as a recording of “qualitative or historical significance.” In 2008, Calloway was posthumously honored with a Grammy Lifetime Achievement Award.