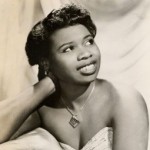 Phillips was born December 23, 1935 in Galveston, Texas. In 1949, she won an amateur talent contest and began touring as “Little Esther Phillips.” In 1950, she recorded her first hit record, “Double Crossing Blues,” and that was followed by other hits such as “Mistrusting Blues,” “Misery,” and “Wedding Boogie.”

Few female artists had ever enjoyed such success in their debut year of recording. But, just as quickly as the hits had started, the hits stopped. In 1962, Phillips launched a comeback with the release of “Release Me” which went to number one on the R&B charts. In 1972, she released the Grammy-nominated album, “From a Whisper to a Scream,” with the lead track “Home is Where the Hatred Is.”

In 1975, Phillips scored her biggest hit single with “What a Difference a Day Makes” which was nominated for the 1975 Grammy Award for Best R&B Performance – Female.