By Chimsima Zuhri on May 13, 2011 in African American History, May, Music 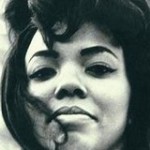 May 13, 1943 Mary Esther Wells, singer and The Queen of Motown, was born in Detroit, Michigan.

By the age of 10 Wells had moved from singing in church choirs to performing in nightclubs around Detroit. In 1960 she was signed to Tamla Records, a subsidiary of Motown, and wrote and recorded “Bye Bye Baby” which peaked at number 8 on the R&B charts. In 1962 Wells released “The One Who Really Loves You,” her first big hit, “You Beat Me to the Punch,” which was nominated for a Grammy Award, and “Two Lovers,” which sold more than a million copies.

These releases made her Motown’s first female star and successful solo artist. In 1964 Wells released “My Guy” which sold more than a million copies and was the number one R&B single of the year. Wells left Motown in 1965 and in 1974 retired from the music industry to raise her family. She returned to recording in 1981 with the album “In and Out of Love” which contained the single “Gigolo” which was Wells’ last chart single.

In 1989 Wells was presented the Pioneer Award by the Rhythm and Blues Foundation and she died July 26, 1992. In 1999 her song “My Guy” was inducted into the Grammy Hall of Fame as a recording of “qualitative or historical significance.”