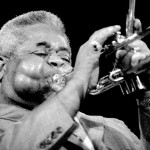 Gillespie was a major influence on many musicians, including Miles Davis, Fats Navarro, Clifford Brown, and Arturo Sandoval. In 1956, he organized a band to go on a State Department tour of the Middle East and earned the nickname “the Ambassador of Jazz.” Gillespie was inducted into the Down Beat Jazz Hall of Fame in 1960 and in 1982 was designated a NEA Jazz Master, the highest honor in jazz, by the National Endowment for the Arts.