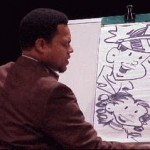 Armstrong started drawing comics when he was three years old.

He earned his Bachelor of Arts degree in art from Syracuse University in 1985. After graduating, he worked as an art director at a Philadelphia advertising agency while submitting comic strips for syndication. In 1988, his comic strip “Jump Start” first appeared and today it runs in more than 250 newspapers. In 1995, the strip won a Wilbur Award, for “excellence in the communication of religious issues, values, and themes.” Armstrong is also a motivational speaker, speaking to about 2,000 young people a month.