By Chimsima Zuhri on November 20, 2010 in African American History, November 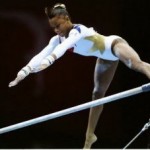 After retiring from the sport, Dawes earned a bachelor’s degree from the University of Maryland in 2002 and began pursuing a career in acting, modeling and television production. She served as President of the Women’s Sports Foundation from 2004 to 2006, the youngest president in the foundation’s history, and is currently on the Advisory Board of Sesame Workshop’s “Healthy Habits for Life” program. She also works as a motivational speaker, concentrating on youth issues.