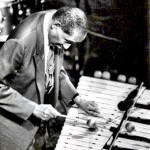 Jackson was born January 1, 1923 in Detroit, Michigan. He was discovered by Dizzy Gillespie who hired him for his sextet in 1946. Around 1950, Jackson formed his own group, the Milt Jackson Quartet which in 1952 was renamed the Modern Jazz Quartet.

Jackson was designated a NEA Jazz Master, the highest honor in jazz, by the National Endowment for the Arts in 1997 and was inducted into the Down Beat Jazz Hall of Fame in 1999.