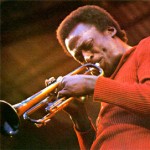 Davis was born May 26, 1926 in Alton, Illinois. By the age of 16, Davis was a member of the musical society and playing professionally. In 1944, he moved to New York City to study at the Juilliard School of Music. In 1945, he entered a recording studio for the first of many times during this period as a sideman.