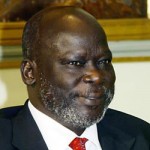 Garang was born June 23, 1945 in Bor, Sudan. In 1962, he joined the first Sudanese civil war, but, because he was so young, the leaders encouraged him to pursue an education. He went on to earn his Bachelor of Arts degree in economics from Grinnell College in Iowa. Garang then studied East African agricultural economics as a Thomas J. Watson Fellow at the University of Dars es Salaam in Tanzania.

After the first Sudanese civil war ended in 1972, Garang spent the next 11 years as a career soldier and rose to the rank of colonel. During this period, he also earned a master’s degree in agricultural economics and a Ph. D. in economics from Iowa State University. From 1983 to 2005, Garang led the Sudan People’s Liberation Army during the second Sudanese civil war and following the peace agreement he served as First Vice President of Sudan, a position he held until his death.