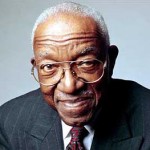 Franklin was born January 2, 1915 in Rentiesville, Oklahoma. He graduated from Fisk University in 1935 and earned a doctorate in history in 1941 from Harvard University. In the early 1950s, he served on the NAACP Legal Defense Fund team that developed the sociological case for Brown v. Board of Education.

Franklin’s teaching career began at Fisk. From 1947 to 1956, he taught at Howard University and from 1956 to 1964 he served as chair of the history department at Brooklyn College, the first person of color to head a major history department. From 1964 to 1968, Franklin was a professor of history at the University of Chicago and chair of the department from 1967 to 1970. In 1983, he was appointed the James B. Duke Professor of History at Duke University.

Franklin published his autobiography, “Mirror to America: The Autobiography of John Hope Franklin,” in 2005. In it he said “my challenge was to weave into the fabric of American history enough of the presence of blacks so that the story of the United States could be told adequately and fairly.” Franklin authored numerous other books, including “The Free Negro of North Carolina, 1790 – 1860” (1943) and “Racial Equality in America” (1976).

In 1976, the National Endowment for the Humanities selected Franklin for the Jefferson Lecture, the federal government’s highest honor for achievement in the humanities. Other honors and awards include the Presidential Medal of Freedom in 1995, the NAACP Spingarn Medal in 1995, and the John W. Kluge Prize in 2006 for lifetime achievement in the study of humanity.