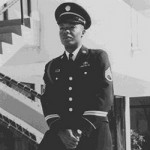 Bryant was born February 16, 1933 in Cochran, Georgia. By March 24, 1969, he was serving as a sergeant first class in Company A of the 5th Special Forces Group, 1st Special Forces. On that day, during a battle in Long Khanh province, Republic of Vietnam, his actions earned him the medal. His citation partially reads: “The Battalion came under heavy fire and became surrounded by the elements of 3 enemy regiments. Sfc.

Bryant displayed extraordinary heroism throughout the succeeding 34 hours of incessant attack as he moved throughout the company position heedless of the intense hostile fire while establishing and improving the defensive perimeter, directing fire during critical phases of the battle, distributing ammunition, assisting the wounded and providing the leadership and inspirational example of courage to his men. When a helicopter drop of ammunition was to re-supply the beleaguered forces, Sfc. Bryant with complete disregard for his safety ran through the enemy fire to retrieve the scattered ammunition boxes and distributed needed ammunition to his men.

During a lull in the intense fighting, Sfc. Bryant led a patrol outside the perimeter to obtain information of the enemy. The patrol came under intense automatic weapons fire and was pinned down. Sfc. Bryant single handedly repulsed 1 enemy attack on his small force and by his heroic action inspired his men to fight off other assaults. Seeing a wounded enemy soldier some distance from the patrol location, Sfc. Bryant crawled forward alone under heavy fire to retrieve the soldier for intelligence purposes. Finding that the enemy soldier had expired, Sfc. Bryant crawled back to his patrol and led his men back to the company position where he again took command of the defense.

As the siege continued, Sfc. Bryant organized and led a patrol in a daring attempt to break through the enemy encirclement. The patrol had advanced some 200 meters by heavy fighting when it was pinned down by the intense automatic weapons fire from heavily fortified bunkers and Sfc. Bryant was severely wounded. Despite his wounds he rallied his men, calling for helicopter gunship support, and directed heavy suppressive fire upon the enemy positions.

Following the last gunship attack, Sfc. Bryant fearlessly charged an enemy automatic weapons position, overrunning it, and single-handedly destroying its 3 defenders. Inspired by his heroic example, his men renewed their attack on the entrenched enemy. While regrouping his small force for the final assault against the enemy, Sfc. Bryant was mortally wounded by an enemy rocket.”