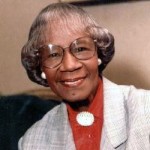 Chisholm was born November 30, 1924 in Brooklyn, New York. She earned her Bachelor of Arts degree from Brooklyn College in 1946 and her Master of Arts degree in elementary education from Columbia University in 1952. From 1953 to 1959, she was director of the Hamilton-Madison Child Care Center and from 1959 to 1964 an educational consultant for the New York Division of Day Care.

In 1964, Chisholm was elected to the New York State Legislature and in 1968 she was elected to the United States House of Representatives, making her the first black woman elected to Congress. Throughout her 14 years in Congress, Chisholm worked to increase spending for education, health care and other social services, and was a vocal opponent of the military draft. In 1972, Chisholm made a bid for the Democratic Party’s presidential nomination, receiving 152 votes at the Democratic National Convention. After leaving Congress, Chisholm was named to the Purington Chair at Mount Holyoke College where she taught for four years.

Chisholm wrote two autobiographies, “Unbought and Unbossed” (1970) and “The Good Fight” (1973). In 1993, she was inducted into the National Women’s Hall of Fame. In February, 2005, a documentary film, “Shirley Chisholm ’72: Unbought and Unbossed,” which chronicled her bid for the Democratic presidential nomination, was aired on public television.