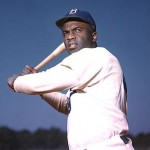 Black won a baseball scholarship to Morgan State University where he graduated in 1950. He was called up to the major leagues in 1952 and chosen National League Rookie of the Year after winning 15 games and saving 15 others.

On October 1, 1952, Black became the first black pitcher to win a World Series game when he pitched the Brooklyn Dodgers to a 4 to 2 victory over the New York Yankees. 1952 was the highlight of his five year career and he retired with a record of 30 wins and 12 losses.

After his playing career in baseball ended, he worked in the baseball commissioner’s office advising players on career choices and became an executive with the Greyhound Bus Company. He also wrote a syndicated column, “By The Way,” for Ebony Magazine and an autobiography, “Ain’t Nobody Better than You,” in 1983. Black died May 17, 2002 and his biography, “Meet the Real Joe Black,” was published in 2010.